Singer, songwriter, record producer, (and also an actress now) Lady Gaga is back with her sixth full-length studio album, a glittery glossy electronic pop record that has been promised to be this big Comeback of sorts for Gaga. While, the album does feel much more grandeur and elaborate in it’s scope, with loud stretched out dance pop routines and lengthy butt-thumping electro-beats, the end result is just a generic and underwhelming record that just feels like a repackaging of the old stuff.

Gaga’s career over the last few years have been a little lackluster. Coming from the pop queen sensation that she became upon her debut, her recent albums have lacked that edge and also the popularity among her fans. The only big hit Gaga has delivered in recent years, is her ‘Star is Born’ soundtrack, a movie which she starred in and earned her multiple Grammy and Oscar nominations, along with her chart topping duet with Bradley Cooper -‘Shallows”. But that was all Ally from the movie singing, it isn’t a Lady Gaga record. So, when Gaga announced this project and with it, her comeback to her glamorous image that she made for herself, fans got excited. And while Lady Gaga sure blasts out all horns here (literally), the result is quite mixed.

The album was designed and remixed right till its release with even the corona-virus pandemic affecting the direction of the album somewhat, as Gaga revealed herself. But thematically, this album is so out there and it talk about so many different things that it was hard for me follow, and its not like that the things she’s trying to say are some profound new ideas but rather cliches sold as LSD. “Earth is cancelled. I live on Chromatica,” Lady Gaga told Zane Lowe. OK, cool, but what the hell is Chromatica? According to Gaga, it is neither a fantasy nor fictional planet, but a perspective, an opportunity to re-frame pain into positivity. That said, the imagery of Chromatica is undeniably futuristic. The video for “Stupid Love” begins with a post-apocalyptic prologue: “The world rots in conflict. Many tribes battle for dominance. While the Spiritual ones pray and sleep for peace, the Kindness punks fight for Chromatica.” Again, big ideas and probably something interesting to explore through music, but when the whole theme of the song is explained in an opening exposition, followed by Gaga dancing with her minions in a short bright-pink dress to uninteresting catchy tunes, it’s hard to take the message seriously. As per traditions, there are tons of Gaga-isms sprinkled around in the album. I don’t mind them, I know that they are purposefully cheesy and I do love me some weird Gaga-ism in between songs, but then again it makes it hard for me to take the ‘big theme’ that she’s trying to convey seriously.

Chromatica is an album that takes Gaga back to her fun pop roots of her early work, and while nothing on here is quite a banger like those early albums, her experience and vulnerability gives this albums the extra edge needed. While Gaga has long represented empowerment in pop, she often acknowledges that healing can be an uphill battle, especially when faced with physical or emotional trauma. Several songs on Chromatica seem to address her ongoing struggles with depression and PTSD. “My biggest enemy is me, ever since day one,” she sings, almost robotically, in the chorus of “911.” “Every single day, I dig a grave/Then I sit inside it, wondering if I’ll behave,” she coos on the booming “Replay.” But Gaga loves a triumph-over-hardship narrative, which Chromatica offers on songs like “Rain on Me,” “Plastic Doll,” and “Free Woman.”

From a production standpoint, Gaga goes all out on this album – each song has this get-your-ass-on-the-floor beat to it that is very in Gaga’s style. But the production is just way too loud for my taste, with songs that feel like are trying to poke your heart with the bass-thumping choruses. Especially. in the song ‘Stupid Love’ – it was torture to my ears, I recommend you to not listen to that songs with your headphones on. The albums has some big features on it too from her contemporary Ariana Grande, popular South Korean group Blackpink and even Elton John – and for the most part the features are big highlight for this album. I don’t necessarily love the song with Ariana – ‘Rain with Me’ – but the songs with Blackpink and Elton John are two of my favorites here.

So, while it might not be the dreamy comeback Lady Gaga promised it is sure an improvement from her last few albums. There are good songs in there with decent beats to bob along, and considering the ties we are living – it is the perfect sugary escapism that you might need right. But if you’re a stan, you’re probably gonna like this album anyway, because it essentially takes Gaga back to her pop origins. But, what I’m more interested to see is, how Lady Gaga evolves from here in the future. 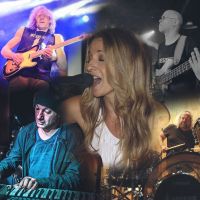