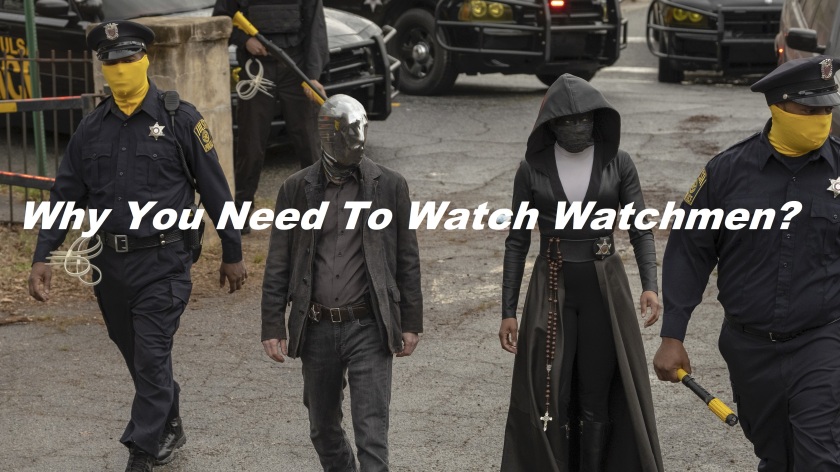 What’s happening in America right now is heartbreaking, but I’m so happy to see so many people come together in support of the #BlackLivesMatter initiative and fight back against the racist system. All of you who are taking part in this protest, whether your posting about it in social media, going to rallies or donating to support groups, I’m so proud of all of you for finally standing up. I’m neither an American or a black person, but this is issue is beyond all race and culture – it is about our fight for humanity.

But still, since I’m not an American and the protests and their ramifications are still in a very premature state – I’m not willing to write about it explicitly yet. So here’s me instead telling you about a series that perfectly encapsulates the problems America is facing today as a whole – HBO’s Watchmen.

Damon Lindelof’s series that is a continuation of Alan Moore’s acclaimed graphic novel ‘Watchmen’, uses the template of the graphic novel and uses it to showcase the struggles of Black America, and with other timely issues . With story lines that deal with racism in America, White Supremacy and heinous crimes against Black people over centuries in America – Watchmen is really a timely classic for our times that you need to see. Let me tell you why.

(NOTE: While reading the original graphic novel helps since this is a continuation of that story, the show is good enough to stand on its own and you can watch it anyway. By the way, who hasn’t read Watchmen? It is considered to be the greatest comic book of all time. Go read Watchmen!)

Right away, the opening of Watchmen’s pilot sheds light on one the darkest days in American history, which will surely send chills down your spine. The Tulsa race massacre of 1921 took place on May 31 and June 1, 1921, when mobs of white residents attacked black residents and businesses of the Greenwood District in Tulsa, Oklahoma. It has been called “the single worst incident of racial violence in American history,” and yet it cannot be found in school textbooks and anyone barely knows about it. This Monday, we marked the 99th anniversary of the incident and yes, we’ve come a long way since 1921, but watching the incidents of violence against the people of the black community that are prevalent even today, I am just left wondering if we have made any progress at all.

Watchmen begins with a young boy witnessing his parents die in the horrible Tulsa Race Massacre, and brilliantly sets up the origin story of Hooded Justice in one of the show’s best twists. It is revealed that Abar’s grandfather (the old dude who killed the police commissioner) is actually Hooded Justice, showcasing how vigilantism lies in their blood.

In episode 6, which is one of best scripted episodes of television I have seen, the tragic backstory of Hooded Justice is revealed as Abar consumes her grandfather’s nostalgia. The show makes changes to original mythology of Hooded Justice’s origins, and adds so much more depth to it. The show explores his tough times growing up alone and taking care of the baby he found on the day of the massacre, then how he fought in the war of USA even tough he was always treated unfair by his superiors and not given the honor he deserves and then how he eventually got a job as a police officer like he always wanted, but that was only for namesake – he still didn’t have any power over the whites who owned him. In fact he almost gets beaten to death by his peers, while his is face covered in mask and then hanged from a tree with a rope, for trying to arrest a rich white asshole.

But the policemen don’t kill him, they just let him go with a warning – Don’t get your nose into white folk’s business. As he walks back to his house with a rope hanging from his neck, tortured and humiliated by his fellow officers like a dog, he sees a few mob men attacking a lonely couple. He puts his mask on and fights the bad guys – and thus Hooded Justice is born that night. To be honest, I have always thought that the Hooded Justice costume looked dumb, but what they did with it here is mind-blowing, and I gotta commend them for that. But he doesn’t wear a mask to be a superhero – he wears his mask to hide his racial identity because he feels society isn’t ready for it. He wears white makeup around his eyes so that nobody realizes that they are being saved by a black man and even after he joins the superhero team Minutemen, his racial identity remains unknown, and as far as the world knows – all the superheroes from history were White. Talk about whitewashing history.

Regina King as the Series Lead

While the Watchmen graphic novel was revolutionary for it’s time, there were noticeably no black or characters of color and minority in the whole story. Also the only female character in the story was the one who was least developed in the story (and raped I might add). Damon Lindelof made it very clear that his intentions were to diversify Watchmen’s rich world and tell the story with modern sensibilities. Casting Regina King as the lead was a big part of that, and she absolutely nails the role. She’s a bad ass as the vigilante who works for the police and we all knew she was great performer, so the acting is top-notch. Watchmen went from being a book with no black characters to a show with a woman of color as the lead.

The Police in Watchmen’s World

The way the police are portrayed in Watchmen is very important to analyse considering the recent events regarding George Floyd’s death. Watchmen takes place in an alternate universe where the government is run by far-left politicians. So in this world, rather than the police exploiting the minorities, here we have the police being attacked by the racist white terrorists who feel they are being suppressed for not being able to use their ‘white privileges’ anymore. Thus, the police wear masks to hide their identities and they are just another part of the vigilante system in Tulsa. Also, an early scene in the show establishes how the police aren’t allowed to use guns anymore, unless a threat is verified, so that the department can reduce incidents of cop killings. We definitely need a check like that in our real world.

The white Supremacists form a cult in Watchmen’s world, who wear Rorschach masks in memory of their beloved misguided hero who believed in ‘Justice even in the face of Armageddon’. And what justice are they fighting for – loss of their white privilege or the humiliation in treating a black person equally?

Another revolutionary casting from the series came as a big surprise, as it was revealed Abar’s husband, played by Yahya Abdul-Mateen II, was secretly Dr. Manhattan in hiding. Apart from a black actor portraying a famous character from comics who is traditionally white, this change is immensely powerful for what they decide to do with Dr. Manhattan’s story line here. Yahya is amazing in the role, and plays Dr. Manhattan so good that he steals every scene he’s in. And like the original, Dr, Manhattan raises many questions of love, faith, destiny and time in the series that are worth analyzing and giving a deep thought to.

Watchmen has a long history of dealing with politics and asking philosophical questions – it is what made Alan Moore’s original graphic novel so famous. The graphic novel broke down the superhero genre and really analysed what it meant to be a superhero, and HBO’s adaptation continues this tradition. There’s so much to dig into and analyse in Watchmen, that if I were to discuss them all, I would need to write at least ten more posts on the show. So, in case you haven’t seen the show yet and are at the safety of your home – it is the perfect time for you to binge Watchmen on HBO. You’ll have a great time while subsequently get educated on some timely topics, and at the end you will be left with some heavy questions to ponder upon for hours.